Sunshine Cove is gaining momentum with Groups popping up all the time.
Find a group that suits you or let us know about your group so we can list it here.

Let Us Know So Others Can Join You

Table of Groups, Times and Places The Sunshine Cove Residents’ Association’s ‘Coffee Group’ meets Second Friday at 10.00am at “Harvest Cafe” in the Kon Tiki Building on Plaza Parade.

We’d love to see you there!

The Sunshine Cove Book Club meets on the 3rd Monday of the month in members’ homes. If you are interested in joining the SCRA Book Club, please contact us by email and we will pass your info on to the group. 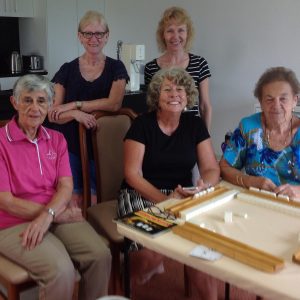 Mahjong is a tile-based game which was developed in China in the Qing dynasty and has further developed throughout the world since the early 20th century.

In Chinese, the game was originally called 麻雀 (pinyin: máquè)—meaning sparrow— which is still used in some southern dialects. Most Mandarin-speaking Chinese now call the game 麻将（májiàng）, which is a homonym of one way to refer to sesame paste. It is pronounced mah-ZHONG in English which is an approximation of the pronunciation in Mandarin.

It is commonly played by four players and requires tactics, observation, memory and teamwork.

The Sunshine Cove Mahjong Group meets every Wednesday at 1pm, at the various members’ houses.

Learn more about how to play here.

This site uses cookies. By continuing to browse the site, you are agreeing to our use of cookies.

We may request cookies to be set on your device. We use cookies to let us know when you visit our websites, how you interact with us, to enrich your user experience, and to customize your relationship with our website.

Click on the different category headings to find out more. You can also change some of your preferences. Note that blocking some types of cookies may impact your experience on our websites and the services we are able to offer.

These cookies are strictly necessary to provide you with services available through our website and to use some of its features.

Because these cookies are strictly necessary to deliver the website, you cannot refuse them without impacting how our site functions. You can block or delete them by changing your browser settings and force blocking all cookies on this website.

These cookies collect information that is used either in aggregate form to help us understand how our website is being used or how effective our marketing campaigns are, or to help us customize our website and application for you in order to enhance your experience.

If you do not want that we track your visist to our site you can disable tracking in your browser here:

We also use different external services like Google Webfonts, Google Maps and external Video providers. Since these providers may collect personal data like your IP address we allow you to block them here. Please be aware that this might heavily reduce the functionality and appearance of our site. Changes will take effect once you reload the page.